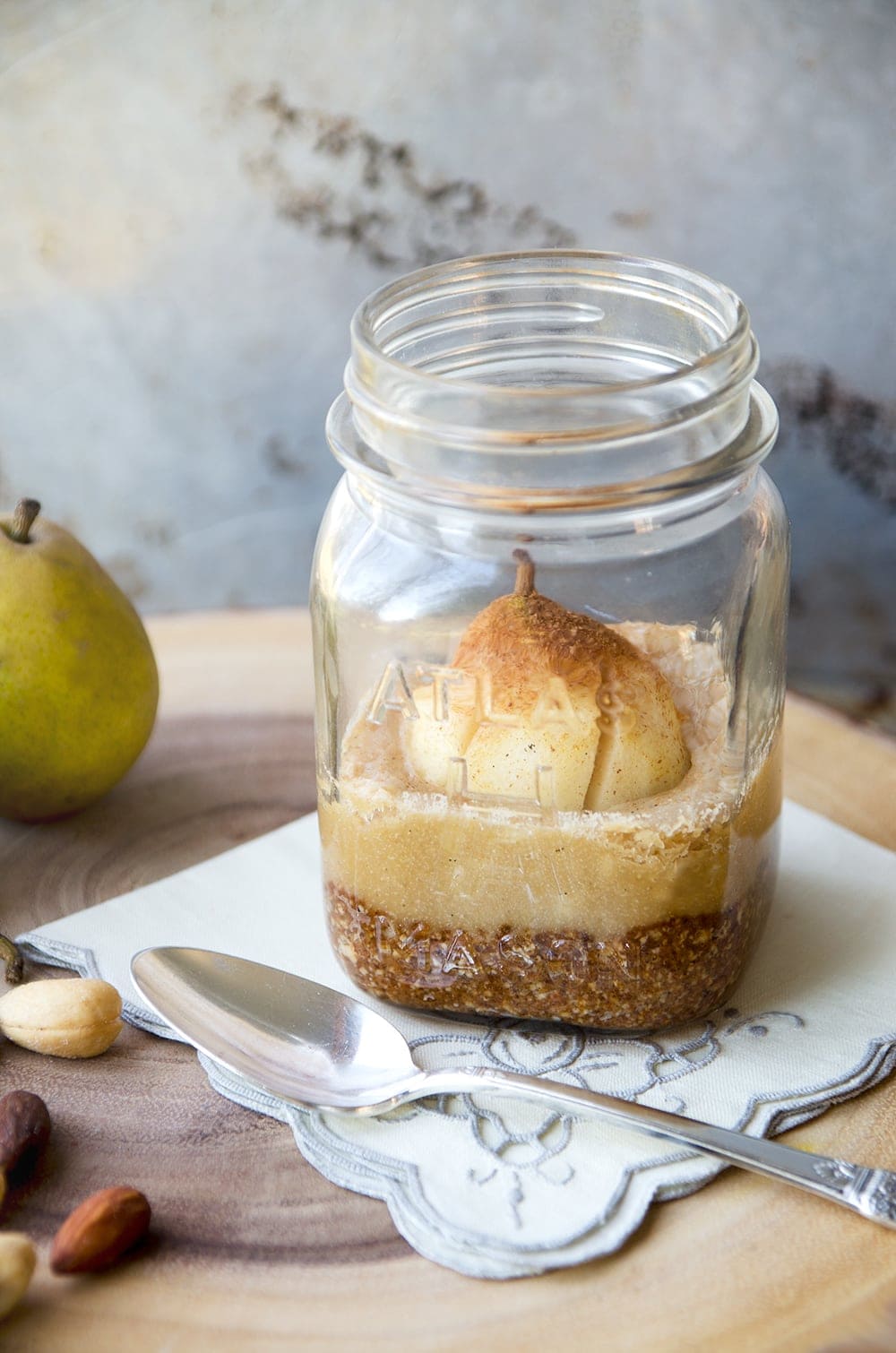 Nutty Pear Crumble is a delicious, tart-inspired dessert that features a vegan cashew custard with a gluten-free cookie crumb bottom.

This creamy pear dessert can be baked two ways, in a Mason jar or in a creme brulee dish and meets a variety of dietary needs, making it the perfect treat for holiday dinners! It is gluten-free, dairy-free and vegan, but just as rich and decadent as a buttery dessert. 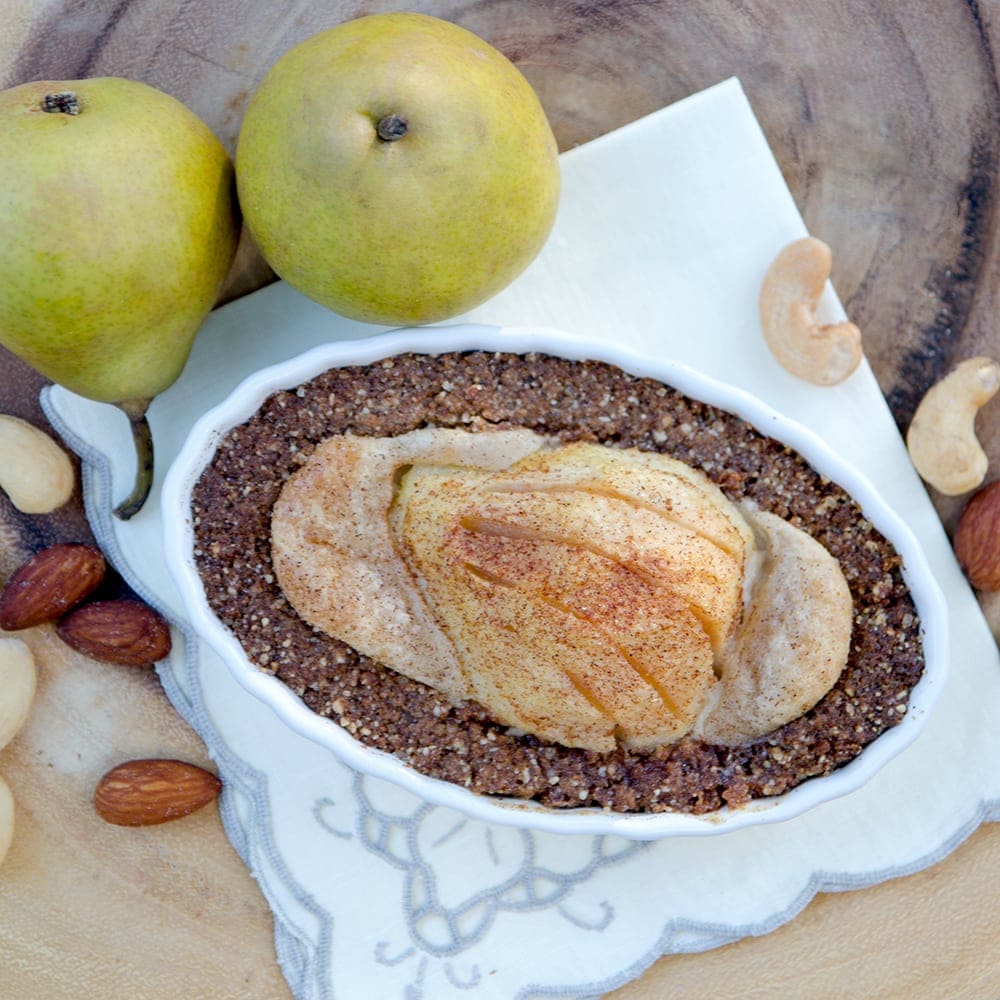 Recently on a media tour of Gettysburg, I was introduced to Hollabaugh Bros. Farm Market. They are a family owned farm and orchard that features pick-your-own produce, a farm market, a bakery, and cooking classes. It was so fun to visit them, take a class, tour the farm…but the best part was bringing goodies home to bake with!

I love pears, but I had never heard of these sweet little beauties called Seckels until I visited Hollabaugh Bros.  Seckels are very small pears that have a creamy white flesh. It sounds like they would be a great garden fruit tree because they are self-pollinating and semi-dwarf, hence the small size fruit. Also called a Sugar Pear, I thought that their small stature and sweet, juicy flavor would make them perfect for individual desserts. 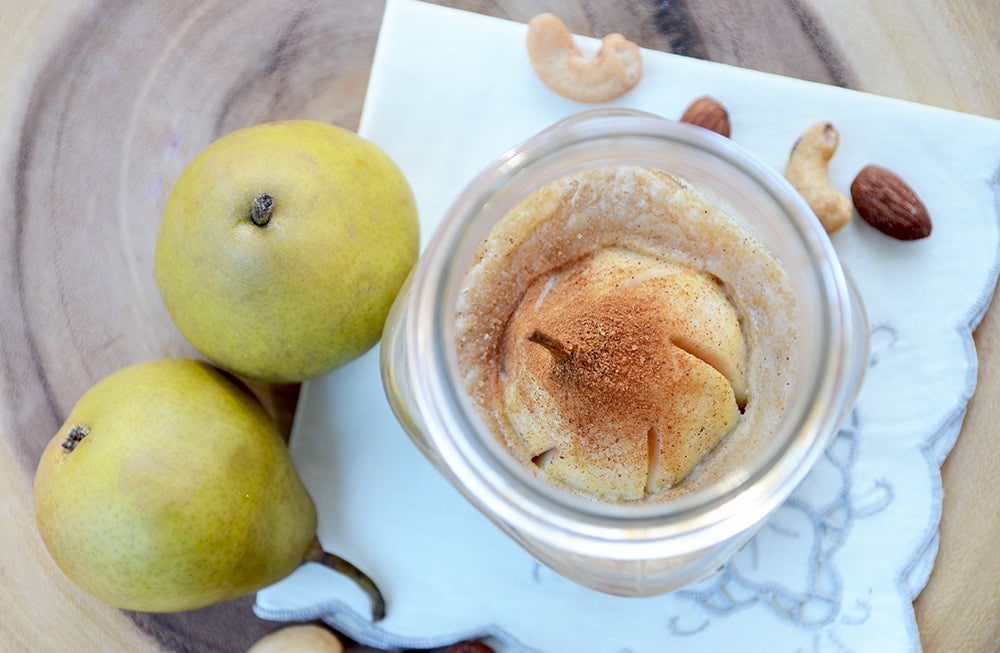 So, I gave myself the tall order of making a gluten-free, dairy-free, vegan tartlets with these pears. Not easy for someone who doesn’t follow any of these diets and loves butter and baked goods, but I was determined to tackle this goal. Everything was looking great until it was time to pop them out…They were delicious but would not release from the tart pans without crumbling, so I had a make-it-work moment and decided that the issue was the baking dish not the dessert itself.

So I’m showing you two ways you can bake up this wonderful nutty pear….tart….pie-in-a jar…..parfait…..”crumble.” That’s the name I’ve given it, but don’t box in this dessert! It defies expectations! 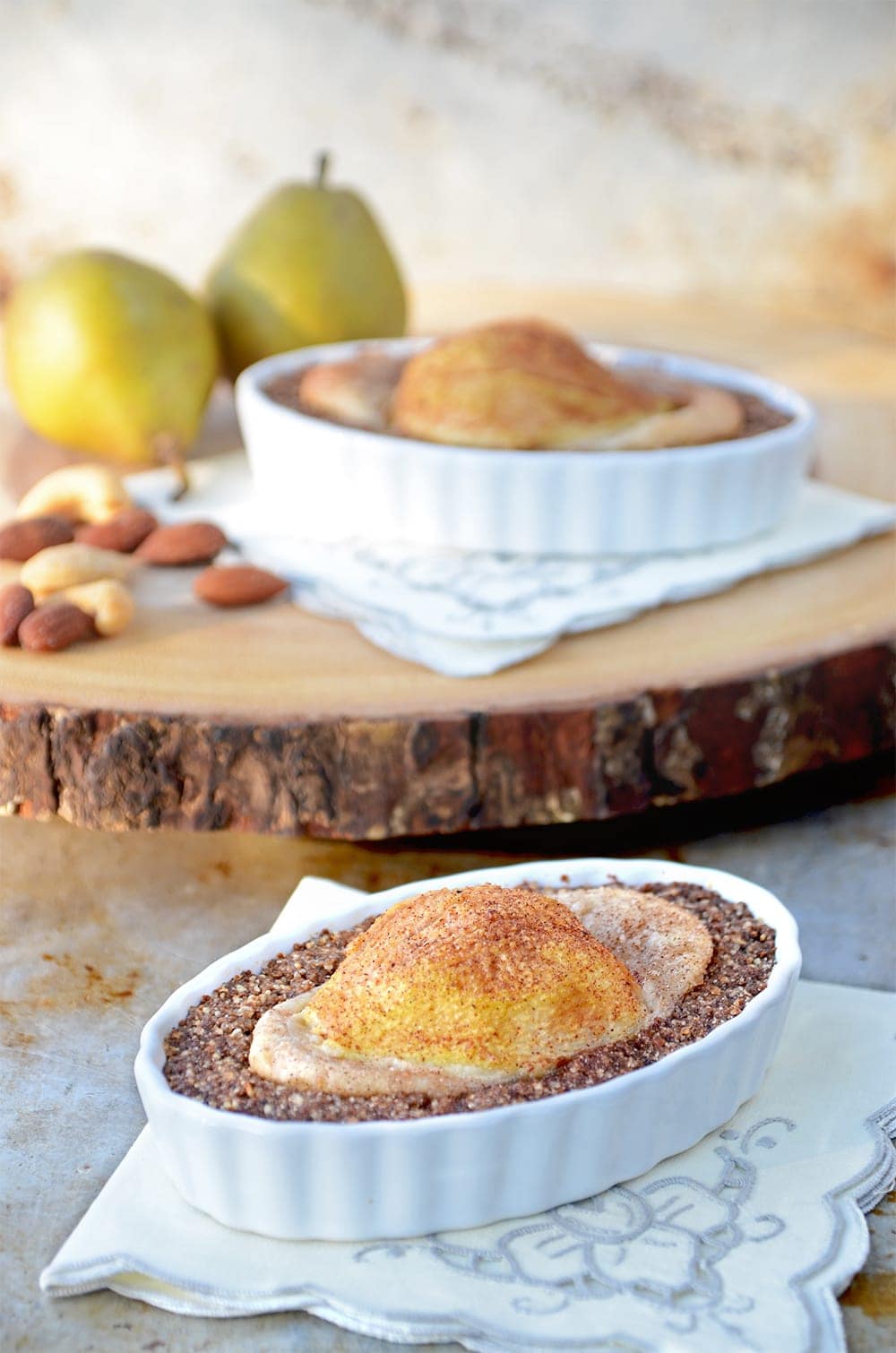 It can be made in small individual dishes or in a jar. I had these creme brulee dishes on hand and thought I would try them since they were only slightly larger than the tart pans I was using. And then I found these Hazel Atlas Mason jars at an indoor flea market and thought I would give them a try too. (Also got these cute cocktail napkins at the same place!) 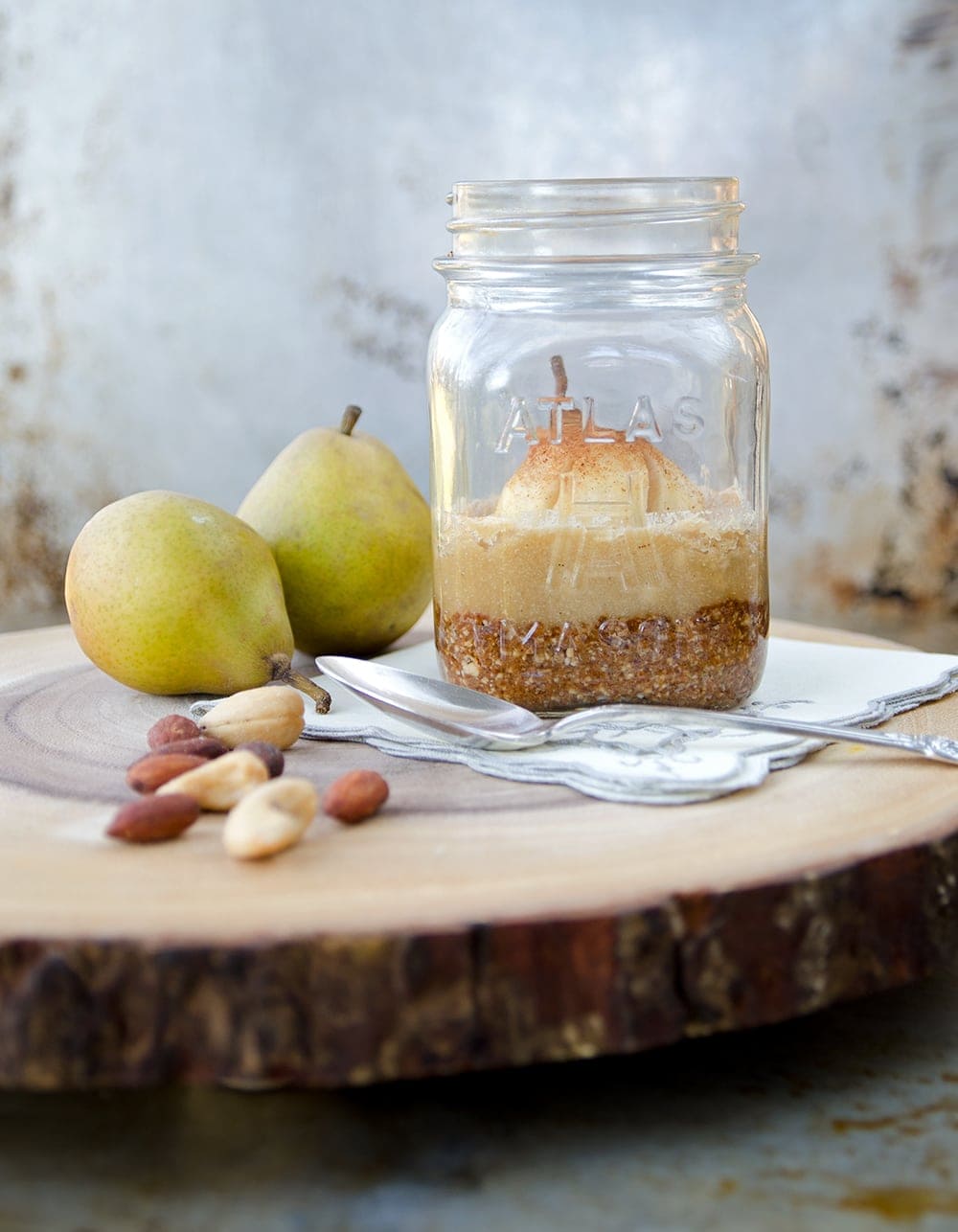 Both ways worked great, but my favorite was the Mason jars. I love how they show off the layers of this Nutty Pear Crumble… cookie and nut crust, creamy cashew custard and on top, the whole Seckel pear with a dusting of cinnamon sugar. So pretty and so yum!

I tested these out on several of my neighbors (without telling them they were vegan) and they were a hit, so even if you are not gluten-free, dairy-free or vegan, I promise you’ll like them too! 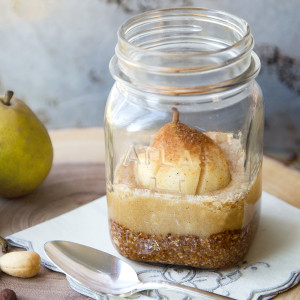 These vegan, dairy free and gluten free desserts are similar to a tart, but they should be served in the baking dish they are baked in. I recommend using crème brulee dishes (use half a pear) or wide mouth Mason jars (use a whole pear).
5 from 1 vote
Print Rate
Course: Dessert
Prep Time: 40 mins
Cook Time: 50 mins
Total Time: 1 hr 30 mins
Servings: 8 -12 servings
Author: Vintage Kitty

You can prep the cashew custard, the lemon mixture and the cookie crust a day in advance. Store all three in the refrigerator in tightly covered dishes until ready to assemble and bake.
Tried this recipe?Let us know how it turned out for you! Scroll down to leave a comment below. 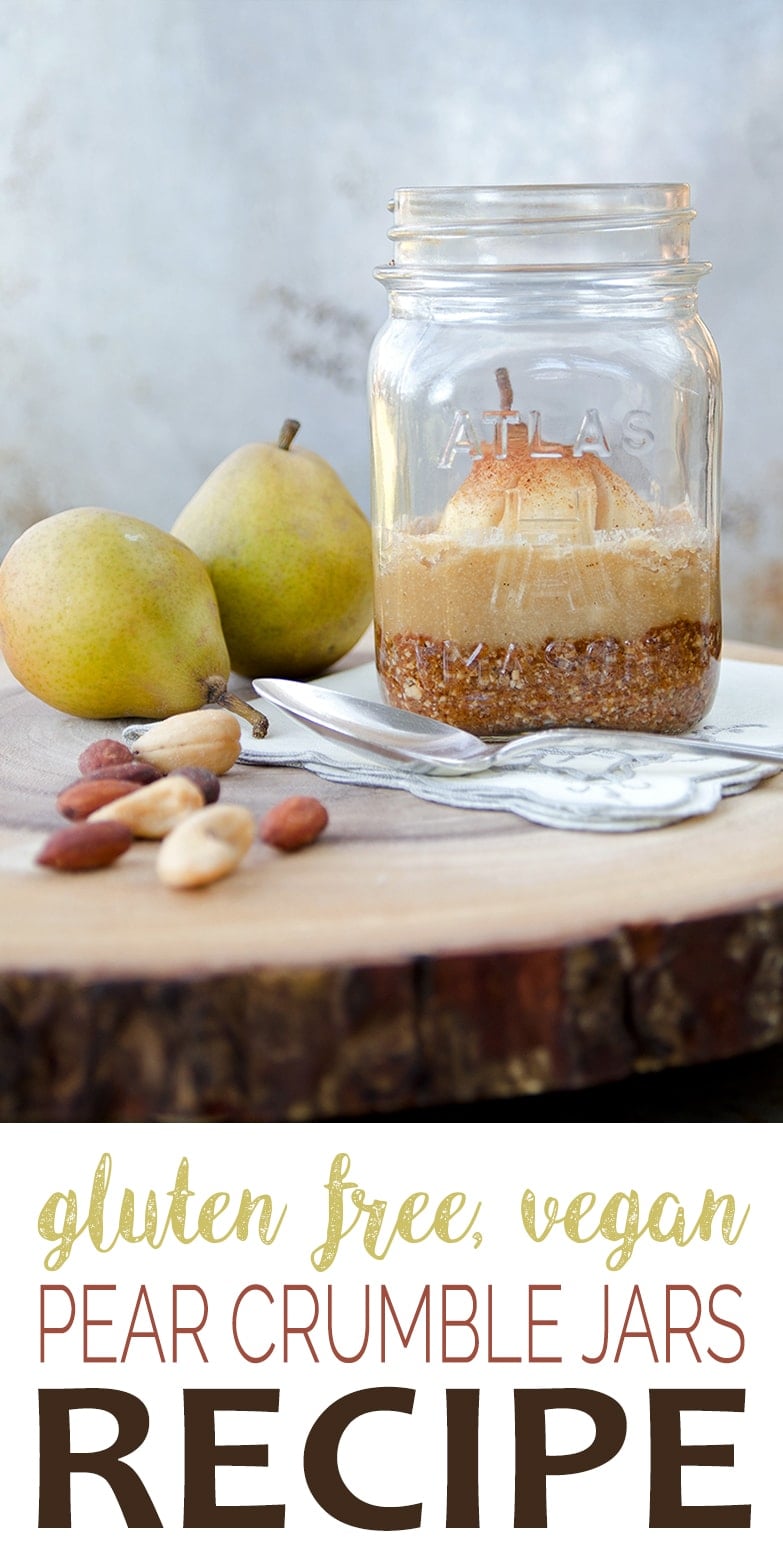