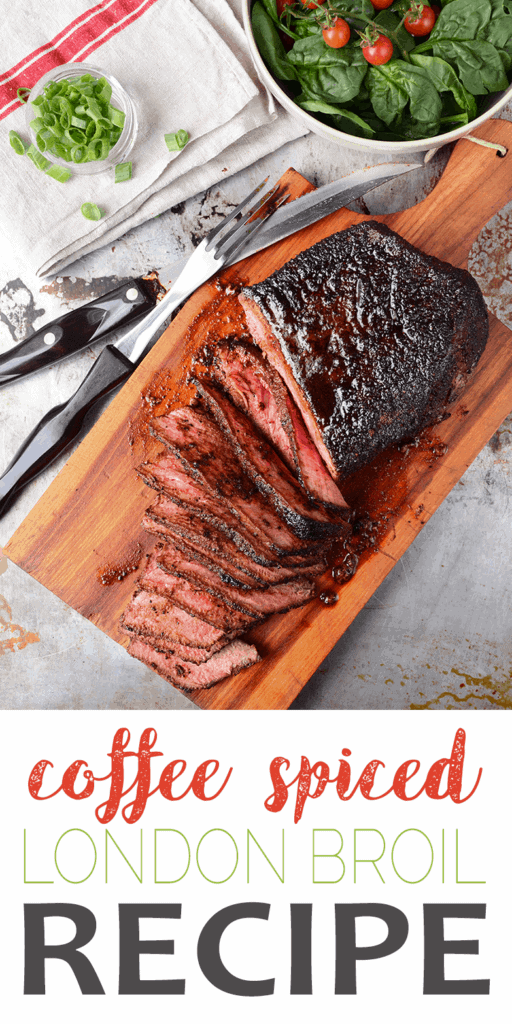 This Coffee Rubbed London Broil recipe is pan seared, locking in the flavor of this thrifty cut of beef.

No marinating required! Cheap eats meets gourmet dry rub in this easy London broil recipe. It cooks in under 30 minutes and is stellar as a dinnertime main or sliced for sandwiches.

This summer our local supermarket had a special on London Broil cuts. At buy one, get one free, I couldn’t pass up the sale, so I piled my cart full of them.

Okay, maybe not full, but I bought enough to freeze for later!!!

Over the years we’ve cut back on meat, preferring to spend our grocery budget on organic vegetables and fruits. So, I am always on the lookout for a specials like this.

There are only two of us, so in general, we don’t eat roasts very often. But this top round cut of beef is the best of both worlds.

It comes in small 2-3 pound cuts and the leftovers are excellent for sandwiches! So, this one London broil can make multiple meals with very little effort.

What is london broil?

The name London broil might be a bit confusing. Despite its name, the dish is actually from North America, not England.

It’s typically known as a style of cooking and not a cut of meat but I guess the recognizable name sells. I’ve heard of flank steaks, shoulder, bottom round, sirloin tip and top round being labeled as such. If you’re interested in learning more about the history of the London Broil technique Cook’s Info has some good background on the subject.

To make this recipe you want to make sure you get a cut that is 1.5-2 inches thick. I’ve suggested a 2 pound steak because in our taste tests smaller cuts were more tender while those over 32 ounces were slightly tough.

The benefit of this recipe lies in the coffee dry rub. It’s a simple combo of sweet, bitter and savory flavors that you most likely already have in your pantry. Simple ingredients like chipotle, brown sugar and cocoa will make this cut of meat delicious!

The rub can be made in advance if you’re into meal prepping but if not, it takes less than 5 minutes to put together. Before cooking the London broil, you pat the meat dry and then coat it with this glorious rub. No marinating and no waiting!

How to cook London broil

Did I mention that this recipe is pan seared? It starts on the stove and then finishes in the oven, so it’s a year-round, no special equipment kind of recipe too.

I cooked mine in a cast iron skillet, because that’s the pan I had that fit the steak. It was great for getting a good sear. Once the steak has a nice crust on both sides, transfer it to the oven to cook until it reaches 125 degrees Fahrenheit.

The meat will continue to cook even out of the pan, so, maybe I was a little quick to say no special equipment. Every kitchen should have a good instant read thermometer so you don’t overcook your steak. Rest the meat for 5-10 minutes. This way the juices will reabsorb into the London Broil, making it more tender.

The downside of the cast iron is it that it retains heat a little too well. If you use cast iron or a heavy bottomed Dutch oven, make sure to rest your meat on the cutting board or you will end up with a tough, overdone doorstop! Lesson learned!

What to serve with steak

This flavorful cut of beef is the main attraction, of course! Optional side dishes include our soft and fluffy rosemary sweet potato rolls. mashed potatoes or sweet potato fries.

Looking to add some veggies to the meal? Why not whip up some pan seared brussel sprouts or a summer corn salad?

Now on to the London Broil recipe! Enjoy! 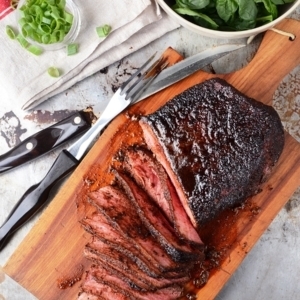 Hungry for more? Check out all our Main Course recipes!

Add ground cinnamon directly to the coffee grounds for a special drink!