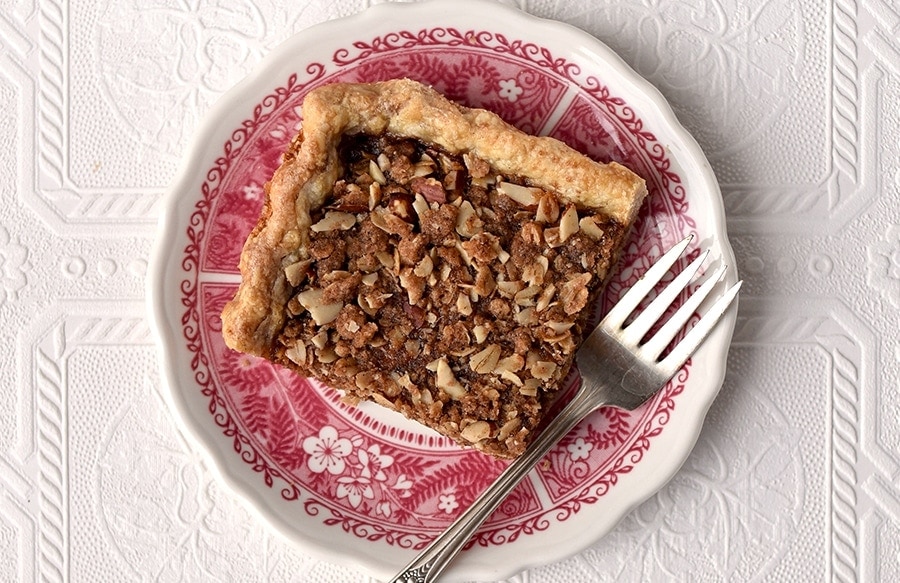 This apple slab pie has everything your sweet tooth desires! Doesn’t a flaky cinnamon crust filled with luscious apple butter and an almond oat crumb sound irresistible? You know you want a slice!

Invite more people over because this Apple Butter Crumb Slab Pie feeds a crowd! Enjoy a piece with our Homemade Cinnamon Coffee

Not that I don’t like pie year round! “Pass the pie, please!” sounds awesome in any season. But the American holiday table is incomplete without a pie.

Nothing is as American as the classic apple pie. But we’re putting our own spin on the tradition by using apple butter.

I love a good apple butter. You know the kind… lusciously smooth, a tad sweet with just the right amount of spice.  The type of jammy apple butter you load onto buttered toast to make chilly fall mornings delightful?  Well, we’re giving this condiment new range with this slab pie recipe.

Apple butters can vary widely in sweetness. If you have a sweet tooth, go for one with a bit of sugar in it. If you like a less sweet dessert, go for an unsweetened variety.

Want to try making apple butter from scratch? If you share my sweet tooth this recipe from Hunger Thirst Play is great. For an unsweetened jam I like this version from Foodal.

With all the time you save not peeling apples, you can make this awesome cinnamon pie crust recipe from scratch.

The crust is deliciously flaky but still tender. That’s because I use vanilla extract in the recipe.

Many recipes call for vodka or vinegar because it inhibits gluten formation, which can lead to a tough pastry. But I use my homemade vanilla extract which is made with only vanilla and vodka. This trick gets the tender results but with lots of extra flavor.

And flavor is important in this pie dough. The first time around I made an all butter crust and it got all melty in the oven.

There’s got to be some compromise between flavor and beauty. So I split the difference and used half shortening so that the pie crust would hold its shape better.

I was tempted to go all in on the shortening, but I still wanted a bit of butter for the flavor factor.

If desired, you can use an egg wash for a glossy cinnamon pie crust. Whisk together one egg and a tablespoon of heavy cream and brush it on your crust with a pastry brush before you fill it.

Now let’s talk crumb…because when I polled my Facebook peeps about pies an incredible number of them asked for crumble! So we’re delivering the goods with an almond oat crumb that’s nutty and sweet. They were so right, too!

I can’t imagine this apple butter pie without a crumb topping now!

Dessert for a crowd

The busy holiday season NEEDS this pie because who has enough time to create multiple desserts to feed a crowd?

Isn’t it a relief to know you don’t have to peel apples for this recipe? Apple butter to the rescue! This key ingredient makes this an easy apple pie recipe.

But if you’re like me, there can never be too many desserts at a gathering. The maple walnut pie and the rum raisin apple brown betty are two of my favorite fall treats!

So seriously, invite more people to your party…because there’s a whole slab ‘o pie to be had! Do I need to say more? Enjoy ;-) 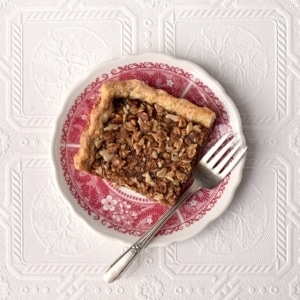 Don't let the time it takes to make this apple slab pie fool you. Almost all of the time is for chilling the dough. It's worth the wait because this no fuss pie feeds a crowd! It's made on a standard 18 by 13 sheet pan, so no pie plate required!
Print Rate
Course: Dessert
Cuisine: American
Prep Time: 2 hrs 20 mins
Cook Time: 1 hr
Total Time: 3 hrs 20 mins
Servings: 20 servings
Calories: 383kcal
Author: Charity Beth Long

A delightful addition to fall gatherings or excellent as a holiday gift.

This heirloom pie crust is flaky, tender and time tested so you know it will never fail.